Here are a couple pictures from my Baptism, which was on Sunday: 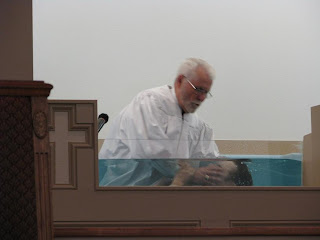 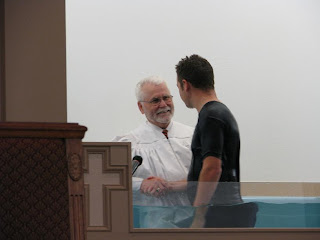 (I would like to thank Mom for awesome photography)


I haven't had much of a chance this week to work on a blog, or sleep, or watch TV, or keep up with my Twitter friends, and sometimes eat.  But hopefully next week will be better!  I'm on Spring Break tomorrow (I only have classes on Saturdays), and I'm turning off my phones.  I haven't slept in since... Um... Well, you get the picture.

Have you ever been to Tanzania?  Yea, me either.  It looks like I just may get to go there on a mission trip!  Last night at church Brother Reed (my pastor), who knew beforehand that I'm interested in missions, told me that he would contact the local missions director about a scholarship for the mission trips.  He explained that they are planning a trip to Tanzania and perhaps I could get in on that.  I expected to hear something, hopefully this week, and if I were lucky by Wednesday night.  Brother Reed called me today around lunch and told me he had contacted the missions director, who goes by Scott, and gave me his number.  Scott said first he wanted to know if Brother Reed would recommend me for the trip.  Scott later told me Brother Reed thinks I would be wonderful for the trip.  Scott told me over the phone that I'm lucky because the deadline for getting airline tickets for this trip is very soon.  Next would be to figure out if it's something I would be interested in.  He told me to think about it, and try and get back to him tomorrow at the latest.  I didn't need to wait until tomorrow to answer that--of course I want to go!  Now the fun part, financing it.  Scott said there is a chance that I could get help ranging from 10 to 15%.  That would be wonderful considering that cost of the trip.  However, that leaves a lot left to raise.  If anyone knows of great ways to raise money for a mission trip--PLEASE let me know!!
Posted by Donny at 4:30 PM 3 comments: