Baseball is the Backstory

If you know anything about me, it's that I love the history of baseball.  It fascinates me.  I find it funny when people speak of the "vast" histories of the NBA or NFL --I scoff.  The story below precedes most modern sports while baseball has mostly remained the same great sport it was from the turn of the 19th to the 20th century, which underscores why I love it as much as I do.

Van Meter, Iowa prides itself on tradition.  Heck, their town motto is "tradition with a vision".  I suppose that means that hindsight is 20/20 and they'll keep that in mind when deciding on whether or not to issue me a permit for a yard sale.  Who knows.  Sounds good though, I suppose.  In all seriousness, I'm pretty sure it's their way of boasting about a product of their little piece of heaven in Iowa, Robert "Bob" William Andrew Feller. 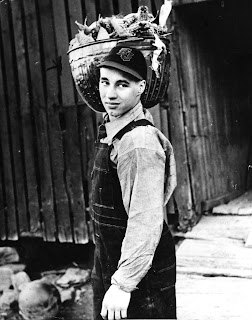 Better known as "The Heater from Van Meter", Bob was only 17 years old in 1936 when he began his major league baseball career with the Cleveland Indians.  He hailed from a farm where he learned his trademark "windmill" windup while throwing the ball around with his father Bill.  Feller was initially signed for one dollar and an autographed baseball (heckuva deal for the Indians!).  Upon completion of the semester he was supposed to report to a minor league baseball club.  At the time however, only minor league teams were permitted to sign amateur players, prohibiting the Indians from assigning Feller.  After a court dispute Bob was released from his contract then resigned by the club to a major league contract. 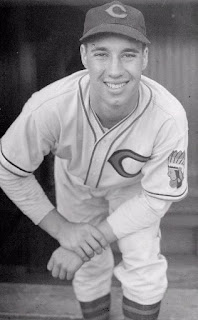 From 1936 to 1941 "Bullet Bob" had a stellar career including being the first pitcher to win 24 games in a season under the age of 21 and didn't have a single losing season.  He threw a no-hitter in 1940 and had more than 240 strikeouts multiple seasons in a row.  All this, and he hadn't even hit his prime.  His prime would be from 1942 to 1945 and involve an all-new uniform.

I told you all that, to tell you this: Bob Feller is one of many of the "Greatest Generation".  This generation survived the Great Depression only to be spun on their heels in 1941 when the Japanese bombed Pearl Harbor.  They expressed their grief by standing up for their country and going to war.  Feller was one among a multitude of players who left behind fabulous baseball careers to go blindly into World War II. 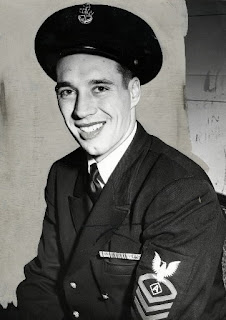 Here is Bob's story in his own words:

I was driving my new Buick Century across the Mississippi River, across the Iowa-Illinois state line, when my world — everyone’s world — changed forever.
It was Dec. 7, 1941. I was driving to my meeting with my Cleveland Indians bosses to hash out my 1942 contract, and out it came on the radio: the Japanese had bombed Pearl Harbor.
The last thing on my mind right then was playing baseball. I immediately decided to enlist in the United States Navy. I didn't have to — I was 23 and strong-bodied, you bet, but with my father terminally ill back in Van Meter, Iowa, I was exempt from military service.
It didn't matter to me — I wanted to join the fight against Hitler and the Japanese. We were losing that war and most young men of my generation wanted to help push them back. People today don’t understand, but that’s the way we felt in those days. We wanted to join the fighting. So on Dec. 9, I gave up the chance to earn $100,000 with the Indians and became the first professional athlete to join the Navy after Pearl Harbor.
It was one of the greatest experiences in my life. You can talk about teamwork on a baseball team, but I’ll tell you, it takes teamwork when you have 2,900 men stationed on the U.S.S. Alabama in the South Pacific. I was a chief petty officer. I helped give exercises and ran the baseball team and recreation when we were in port. But I was also a gun captain — I was firing a 40-millimeter quad at eight rounds per second.
The Alabama was involved in one of the most important battles of the Pacific. In June 1944, we were supposed to shell the beaches of Saipan for two hours so that our Marines could land safely. The Japanese tried a surprise attack — but we were ready. The American Navy and Air Force, we had all the big carriers and battleships like the Iowa, the Wisconsin, the New Jersey, the Alabama, you name it, we had them all. Our pilots and gunners shot down 474 Japanese aircraft, sank three of their carriers and got several of their escort ships. And when the sun went down that night, it was the end of the Japanese naval air force. We made it look so easy, ever since they've called it the Great Marianas Turkey Shoot.
We were involved in so many other important engagements, including some in the North Atlantic over in Europe. Our ship won nine battle stars, eight of them while I was on it. It was an incredible time for all of us.
I went on inactive duty in August 1945, and since I had stayed in such good shape, and had played ball on military teams, I was ready to start for the Indians just two days later, against the Tigers. More than 47,000 people came to see me return — there was such a patriotic feeling, with V-J Day so fresh in everyone’s minds. Even though I hadn't pitched in the major leagues in almost four years, I struck out the first batter. I wound up throwing a four-hitter and winning, 4-2.
What a great night ... I kept it up the rest of the season, too, and then had what many people call my best season in 1946, when I won 26 games with 348 strikeouts.
A lot of folks say that had I not missed those almost four seasons to World War II — during what was probably my physical prime — I might have had 370 or even 400 wins. But I have no regrets. None at all. I did what any American could and should do: serve his country in its time of need. The world’s time of need.
I knew then, and I know today, that winning World War II was the most important thing to happen to this country in the last 100 years. I’m just glad I was a part of it. I was only a gun captain on the battleship Alabama for 34 months. People have called me a hero for that, but I’ll tell you this — heroes don’t come home. Survivors come home.  Credit

I disagree with the last line.  Bob is a hero.  I don't think we have as many people that would put it all on the line as he did.  In all actuality, only one comes to mind.  But, I suppose that's why we're not the "Greatest Generation".

Bob went on to represent the Cleveland Indians for the rest of his life.  In 2009 Feller even pitched in the Old Timer's Game  in Cooperstown, NY, site of MLB's Hall of Fame.  At the time he was 90 years old and rumor was he could still get the ball up around 70 mph.  That's fascinating.  I probably can't get the ball anywhere near 70 and I'm in my prime!  In 2010 the Cleveland Indians "Man of the Year Award" (similar to other teams' Most Valuable Player) was renamed "Bob Feller Man of the Year Award". 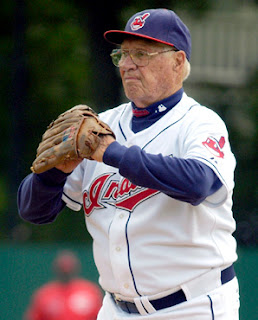 Bob never forgot his roots, even supporting Van Meter in building a Bob Feller Museum.  The farm that was Feller's boyhood home remains, as does a red barn built in 1886 by his grandfather Andrew.  It is also a federally mandated historic site.  Feller once said that if he could relive any moment from his youth it would be, "Playing catch with my dad between the red barn and the house."

That sounds nice.
Posted by Donny at 4:28 PM